Most Creative Houses in the World 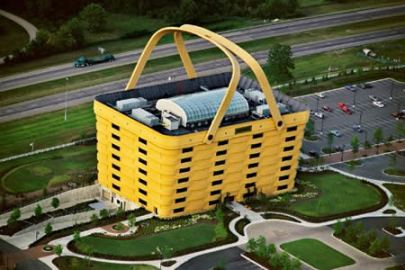 Can you imagine a building in the form of a basket! It sounds ridiculous but some architects give a tendentious turn by using their incredible imagination especially when it is supported with lots of money. This unique building was invented by Dave Longaberger who was dreaming of creating such an office building for his company operating in the field of administrative services. It is officially proclaimed to be one of the most unconventional business buildings in the world.


Longaberger believed the idea was one of his best and would draw attention to the company. But, when he started spreading the idea of building a Home Office that was really a basket, most people didn’t take him seriously. However the dream was to come true and on December 17, 1997 in Newark, Ohio there appeared the world’s largest basket and also the seven-story corporate headquarters of the Longaberger Basket Company.


The Longaberger basket building is now a real point of interest that attracts not only natives but tourists as well.

Prague has always been a beautiful city but from the moment the Croatian architect Vlado Minulich met the Canadian architect Franc Gerry, Prague became famous for its Dancing House. It resembles a post-modern statue of a dancing couple. Being hit by bombs in 1945, the building was uninhabited and half destroyed until the two architects have turned it into a cultural centre named Fred & Ginger. Nowadays The Dancing House is one the most visited tourist attractions in Prague

This unique piano house was built recently in An Hui Province, China. Inside of the violin is the escalator to the building. The building displays various city plans and development prospects in an effort to draw interest into the recently developed area.

This is one of the most beautiful buildings in the world was built as a home for musicians. It is officially announced a tourist attraction.

The Library in Kansas City, USA

Building a library has always been a symbol of a good public cause but creating a building in the form of a book shelf this could happen only in a country with unlimited possibilities such as America. The building has numerous awards for its uniqueness and original architecture.

Thailand, a country famous for specific deluxe in the tourist industry this time catch our attention with a building in the shape of a robot. The building houses United Overseas Bank’s Bangkok headquartersa and was originally designed to reflect the computerization of banking. The architect was Sumay Jumsay who was later awarded by the Government for his creation. Completed in 1986, the building is one of the last examples of modern architecture in Bangkok and has received international critical acclaim.

A modest and almost destroyed house in Rotterdam is not far from being knocked down. No one wants to buy the property in the suburbs of the city. That is why a Dutch company has agreed to maintain the building until a potential buyer appeared. Thus a building thoroughly blue was born even the windows and the doors were painted in the same color. Soon the Blue Building became one of the most popular houses in Rotterdam.

This one leg house is one of the oldest buildings in the world featuring rope ladders between each floor. Once being a brewery at present it is a modern residence of Astra beer with lifts instead of rope ladders.

The Polish architect Zalesky was inspired by the fairy tale of “Hansel and Gretel”. Working together with Swedish architects he creates a building that reminds of a fairy tale house which is nowadays a commercial centre.

The Sam Kee building is situated at 8 West Pender Street in Vancouver. It is two storeys tall and 1.5 meters (six feet) deep. The city expropriated the owner of the plot all but two meters when Pender Street was expanded. The owner then hired an architect to design a building to fit the remaining property. You can see the result by yourselve.